The only acceptable way to arrive at Valletta is by boat. Nothing else will do. It does not matter whether one arrives by cruise liner, water taxi, speedboat, or pedalo, just so long as the roads leading to Valletta, which are circuitous, narrow and almost perpetually clogged with traffic, are avoided. Arriving by boat also allows the visitor to avoid, or at worst, see only from a distance, Valletta’s disagreeable suburbs, which bring to mind a vision of East Berlin-on-Sea. Valletta’s suburbs demonstrate that there is a direct correlation between the tendency to build upwards on small islands, and the tyranny of the property developer and his insistence on apartments with sea views.

In the cool interiors of the cafés that line the Triq ir-Repubblika, the elderly local women, who are of solid constitution and conversant with the latest fashions, appear to be the friendliest of the city’s inhabitants. They will sit down beside you with their coffee and, on catching sight of your guidebook, will quickly snatch it up, flick through its pages, and begin a discourse on the best places to eat and drink in the neighbourhood. Such amiability and sympathy is often, however, superficial at best, for the moment their companion arrives, who they had arranged to meet in advance, they turn away and shun you as if you were never there at all.

More beguiling than anything else in Valletta are the city’s old wooden doors, the best of which can be found in the shadowy and quiet side streets that run parallel to the Triq ir-Repubblika. No two doors are the same, each varying in the arrangement of its wrought ironwork, wooden panels, and choice of colour of paint. What makes these doors especially fascinating however, is their seeming state of dilapidation. Their faded flaking paint and eroded surfaces cause one to wonder if these doors aren’t as old as the ancient buildings they protect. And yet, in spite of an aesthetic appeal that is contingent upon their seemingly imminent dereliction, these doors remain solid, functional, put to work. To see a local resident coming or going out of one of these great doors is to catch as authentic a glimpse of Valletta as one could wish for. 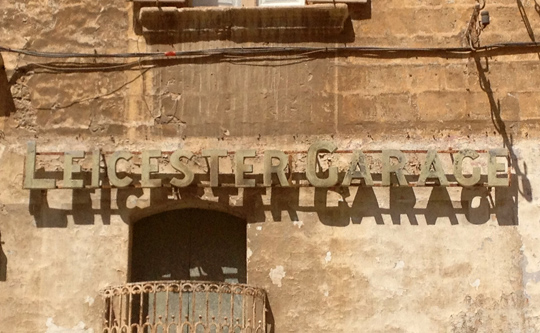 Valletta’s architecture might be predominantly sixteenth- and seventeenth-century in origin, but its shop signs owe their existence to the nineteenth and early twentieth centuries. On every side street and around every corner, one will see faded and flaking letters; painted, carved, stamp-cut out of, or imprinted onto stone, wood, metal and glass, and announcing bars, restaurants, confectionery, furnishings, drapery, tailoring, tobacco, shoes, books and toys. There is, however, no sense of incongruity in the relationship between old signs and even older buildings. The former’s weathered appearances give off something of an aura of authenticity, so that they compliment, even blend into the eroded stone walls onto which they are mounted. In doing so, Valletta’s streets afford a panorama that effortlessly collapses some four centuries of history into a single layer of apparent authenticity.

Valletta bears the superficial marks of its British colonial history as a house bears the marks of an occupant who moved out many years ago, but not before painting a few walls and putting up the odd shelf here or there. Bright red postboxes and telephones boxes are scattered along the main streets, but the city’s pre-British history dominates. In a side street, an unexpected gem; the British Hotel offers an ambiance that speaks of Britain’s tastes at the very end of her occupation of Malta. In the downstairs lobby, a glass-topped, metal-framed coffee table sits between two leather sofas. A mahogany set of shelves stands close by, filled with old paperbacks: novels by John Le Carré and Alistair MacLean. Behind the reception desk hangs a wooden hotel key cabinet and a clock of distinctly seventies vintage. On the floor above, the hotel restaurant offers spectacular views across Valletta’s harbour. To have lunch at the British Hotel is to sit in the past with a window onto the present.