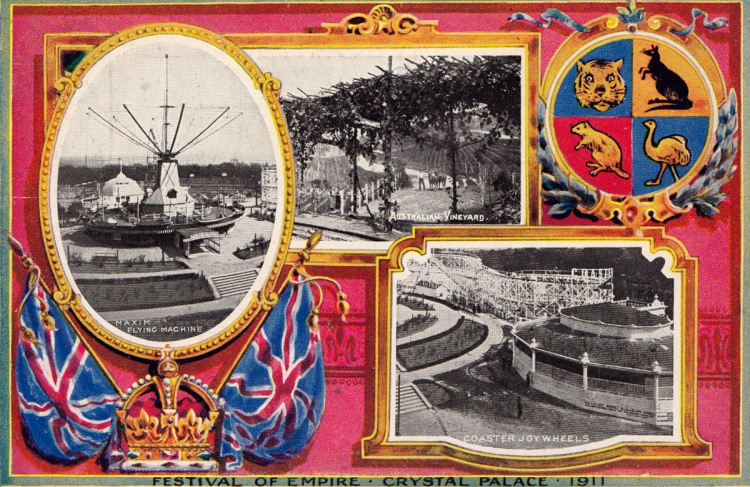 From one imperial capital to another. I found this postcard, which commemorates the Festive of Empire that was staged at the Crystal Palace in London in 1911, in a shop in the Galerie Vivienne in Paris, one fine spring morning in 2014.

Designed by Joseph Paxton and built almost exclusively from iron and glass, the Crystal Palace was one of the architectural wonders of the modern world. Originally intended to house the Great Exhibition that was staged in London’s Hyde Park in 1851, the Palace was subsequently dismantled, remodelled and rebuilt in the south London suburb of Norwood, where it reopened to the public in 1854.

For several decades, the Crystal Palace remained a popular amusement for London’s bourgeoisie and working classes. George Gissing described the crowds rushing to the attraction in his 1889 novel The Netherworld:

At Holborn Viaduct there was a perpetual rush of people for trains to the ‘Paliss.’ As soon as a train was full, off it went, and another long string of empty carriages drew up in its place.

For Gissing, it was the crowds rather than the Palace that provided entertainment:

Hours before the fireworks begin. Never mind; here by good luck we find seats where we can watch the throng passing and repassing. It is a great review of the People. […] Since man came into being did the world ever exhibit a sadder spectacle?1

At the end of the nineteenth century the Palace, now nearly fifty years old, was ageing, decaying, and struggling financially. On more than one occasion it had to be bailed out of its financial difficulties. The hosting of the Festival of Empire in 1911 was one response to the Palace’s woes.

On this Festival of Empire postcard, two photographs show amusement rides at the festival: the Maxim Flying Machine, looking curiously like (and about as safe as) an exploded windmill, and a rollercoaster called the Coaster Joywheels. The third photograph is of the festival’s reconstruction of an Australian vineyard.

The Festival of Empire was a celebration of Britain’s imperialism at its zenith, the ultimate imperialist propaganda showcase, a ‘Social Gathering of the British Family’,2 with the four jewels in Britain’s crown – India, South Africa, Canada, Australia – at its heart, and represented on the postcard by the tiger, ostrich, beaver and kangaroo respectively. In the grounds of the Crystal Palace, Britain’s colonial possessions were reproduced in miniature, in the form of two-thirds replicas of the government buildings of South Africa, Newfoundland, New Zealand, Australia and Canada.

Other scenes included the Australian vineyard, an Indian tea garden, Canadian orchards, New Zealand geysers, South African gold and diamond mines, and a reconstruction of an Irish village. A miniature railway dubbed the ‘All Red Route’ (after the telegraph network that connected all parts of the empire) promised ‘the most wonderful trip ever offered to the public’ and allowed the visitor to see, in a single excursion, the whole of ‘Greater Britain overseas’, with ‘colonials and natives at work.’

And yet, while the All Red Route was circular in layout, and was guaranteed to bring you back to your starting point, just as sure as the sun was never likely to set on the Empire, return trips were not what the organisers of the Festival of Empire had in mind. As well as exhibitions showcasing their products and industries, the colonial government buildings also functioned as recruiting centres for potential settlers from Britain.

The festival daily programme carried advertisements encouraging emigration. For example, British Columbia advertised itself as ‘eminently suitable for those seeking a home beyond the seas’, listing ‘increasing prosperity’ and ‘decreasing taxation’ as just two of its many incentives. On another page of the programme, the High Commissioner for New Zealand promised ‘a splendid pastoral country’ and ‘cheap fares for farmers, farm-hands, and single women domestic servants.’ Elsewhere, the British Empire Agency Limited advertised its ‘colonial information bureau’, which offered ‘information of openings for capitalists and workers’ alike, and bookings ‘for all steamship lines to every part of the Empire.’3

Around the time of the Festival of Empire exhibition, before the First World War, emigration from Britain was at its peak. This at a time when, as Stefan Zweig recalled in his memoir, ‘the whole world stood open to us. We could travel without a passport and without a permit wherever we pleased.’4 Between 1900 and 1909 1.67 million people emigrated from the United Kingdom. In the 1920s, emigration from Britain to the Empire’s dominions and colonies averaged approximately 180,000 people per year. In the three decades after the Second World War, emigration continued to average above 100,000 people per year.5

One of the reasons the Festival of Empire could openly and actively encourage emigration from Britain to the Empire’s colonies and dominions was because, by the early twentieth century, a raft of administrative and legal frameworks existed to facilitate emigration on an industrial scale, usually to the cost of indigenous populations.

For example, in 1905 some 57,000 people emigrated from Britain to Canada, which was more than half of the total estimated number of aboriginal peoples (100,000) in the country. The native inhabitants of Canada had been subjected to government legislation in the form of the Indian Act, first introduced in 1876. One outcome of this legislation was that, ‘by means of industrial schools and other methods, civilized habits [were] slowly superseding the former mode of life.’6

Elsewhere, the European population of New Zealand (thanks in part a result of the gold rush of the mid-nineteenth century) grew from 2,000 in 1840 to just short of a million by 1908.7 One legal mechanism making possible the acquisition of native land for pasture and settlement was the Native Land Court of New Zealand. The Court, established in 1865, facilitated the transfer of Maori land to European settlers, and aimed for the ‘extinction’ of the Maori proprietary customs relating to land.

Gissing’s Netherworld was populated with what Methodist preacher and Salvation Army founder William Booth described as London’s ‘submerged’ classes. Booth’s vision, which he outlined in his book In Darkest England and the Way Out (1890), was to ship these unfortunates out of the capital, by way of a series of incremental and corrective staging posts: from city colonies comprising such worthy institutions as ‘homes for inebriates’ and ‘preventive homes for girls’, to farm colonies (realised at Hadleigh in Essex) and onward to overseas colonies, be they British colonial possessions or other ‘foreign lands’.8

The ruthless simplicity of Booth’s proposal to export Britain’s destitute millions to distant lands neatly sums up the British Empire’s regard for its colonies – and disregard for their native populations. ‘In South Africa, Canada, Western Australian and elsewhere’ Booth wrote, ‘there are millions of acres of useful land to be obtained almost for the asking’. So why not ‘A Great Machine’ capable of ‘drawing up into its embrace the depraved and destitute of all classes [before] pouring them forth on to the virgin soils that await their coming in other lands’?9